Converting a dataset from wide to long


I recently had to convert a dataset that I was working with from a wide format to a long format for my analysis.  I struggled with this a bit, but finally found the right sources and the right package to do it, so I thought I'd share my practical example of reshaping data in R. This post is specifically helpful for those using Demographic and Health Survey (DHS) data.

The DHS dataset includes one observation for each woman. For each observation, there are 20 columns for each birth she could have had for 16 different characteristics.  If no birth happened then the cell is left missing. The characteristics include birth month, birth year, sex of the child, death month, death year, who the child lives with, current age of child, and so on.

For clarity, I've shortened the data to just 7 observations and two characteristics of each birth (b2 and b4) for 3 possible births:

There are a number of ways of doing this in R, including melt() and cast(), plyr(), aggregate(), and others.  However, after a good deal of struggle and looking things up, I found that the reshape() function is the most intuitive and user-friendly for the needs of this problem. You don't need to use melt and cast at all, which are difficult to manipulate in my opinion.

The reshape() function takes in a number of important parameters that will be necessary for our transformation (there are more parameters than this, but I've boiled it down to the ones that are crucial):

Ok, so the most important thing about the reshape function is that you have to give it variable names that it can understand. Specifically, the columns that I want to turn into one column should all follow the same structure in the naming convention. It can be anything with a pattern like this:

etc.  As long as they follow the same text and number pattern. If the dataset is not in this format, you will have a lot of problems and I suggest changing your variable names before trying to convert. For the first example, you would use sep="_", the second would be sep="", and the third is sep="." and all of these are valid.

Ok, so let's try it out. All variables that we want to convert into one column we can put into the varying parameter and R will sort them out based on the naming patterns. We specify a long direction, that our id variable is caseid, and, importantly, that the separating symbol between the name of the variable and its order number is a "_".

This gives us the following result (truncated picture): 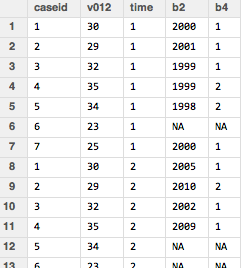 Which is what we wanted! Each observation is now a birth, with corresponding mother caseid and age, and the year (b2) and sex of the child (b4) for each observation correctly lined up. R has added in the time variable which is just the number after the "_" for the varying variables. Notice that R automatically orders the dataset by this time variable, so you will have to re-order if you want it by caseid.

If you wanted to convert all of the 16 characteristics of each birth, you do not need to write out each individual variable. You can easily do it like this, indicating the number of the columns that you want:

Here, I've specified that all variables from column 3 to column 8 are varying variables, and I've also indicated that the new variable that R creates should be called "order" instead of the default "time". Then I reorder my dataset by caseid, name the new columns, and take out all of the missing observations, which are just non-existent births. I get the following result: 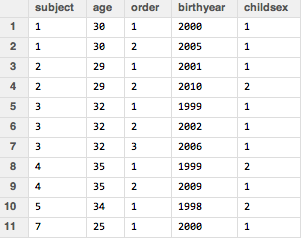 Notice how subject 6 is completely gone because she did not have any children and this is now a dataset of children ever born.

I've made this example of reshape very specific to DHS data, but there are also many great sources on how to reshape data in R. Here are a couple that I found especially helpful:

Posted by Slawa Rokicki at 5:39 AM 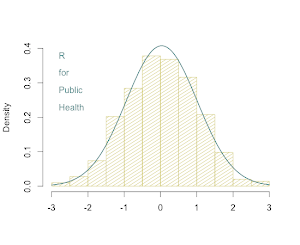